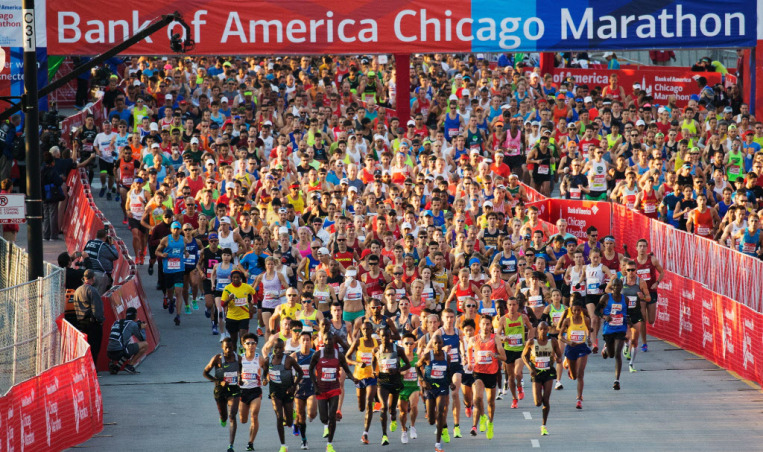 Running the Bank of America Chicago Marathon is the pinnacle of achievement for elite athletes and everyday runners alike. On race day, runners from all 50 states and more than 100 countries will set out to accomplish a personal dream by reaching the finish line in Grant Park.

The Chicago Marathon originated from the Ravenswood Bank Lakefront 10-Mile Runn first held in May 1977. The event was organised by Dr. Noel Nequin, Director of Cardiac Rehabilitation at the Swedish Convenant Hospital. The event was expected to attract 200 to 300 runners but ended up with over 1000 runners taking part. This success spurred Nequin on to organise the first Marathon in September of that year. 1977 turned out to be quite some landmark of a year for running in Chicago with other notable races taking place in the city, including the Chicago Distance Classic with almost 5,000 runners, an unheard number of participants at the time.

That first race was set-up with a $5 entry fee and an 8 a.m. start time, the race was scheduled for September 25, 1977, and specific jobs were distributed amongst the founders. Dr NoelNequin was the medical director; Wendell “Wendy” Miller was the race director; Wayne Goeldner was in charge of registration; Sharon Mier was responsible for organizing 700 volunteers to marshal and officiate the race; and Bill Robinson was treasurer. In addition, Erma Trantor, a friend of Mier’s, was hired to be the race coordinator; Ruth Ratny, a business friend of Flaherty’s, was to publicize the race.

Paula Radcliffe capped off her phenomenal 2002 by shattering the World Record with a stunning 2:17:18 performance.

More than 4,200 runners turned out for that first Mayor Daley Marathon, making it the largest marathon in the world at that time. Dan Cloeter, from Indiana, and Dorothy Doolittle, from Texas, battled the crowds to become Chicago’s first winners in a race that 2,128 actually finished. According to Cloeter, who had run in several other marathons, “I just wanted to win.” Doolittle’s victory not only a personal best time, but also it would be her last marathon.

From that first race the Chicago Marathon went from strength to strength in a market that has over the years seen an explosion in running races of all lengths across the globe. Yet it still holds place as one of those few special Marathons with an iconic appeal. For those who can remember back to 2002, This Marathon is where Paula Radcliffe capped off her phenomenal year by shattering the World Record with a stunning 2:17:18 performance. Against a superior field, including defending champion and former World Record holder Catherine Ndereba. In 2008 the Marathon took on it’s current sponsor and name ‘The Bank of America Chicago Marathon’

Fast forward to 2017 and the Chicago now has 45 thousand runners on its streets each October with runners entering from all over the world. In 2016 iTab was proud to become the medal personalization partner for the Chicago Marathon, ensuring that everyone who runs in this race can commemorate and celebrate their achievement, sharing their story with friends and family for years to come.