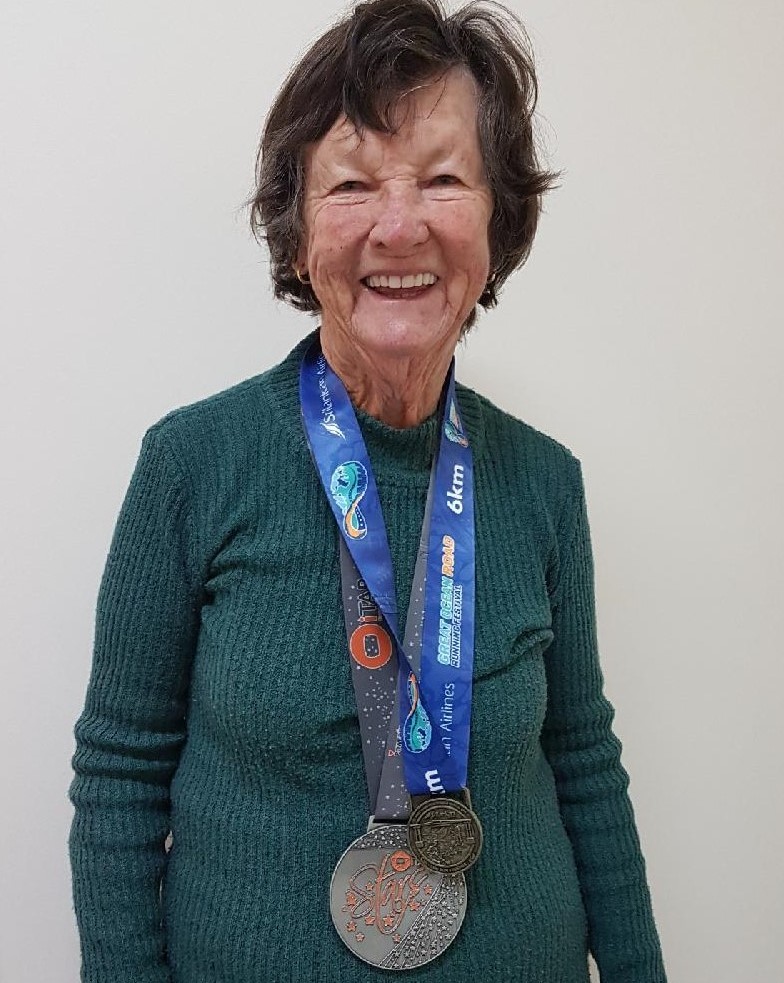 By Natalie French23rd July 2019No Comments

Eleanor Hatswell came out of retirement at 83-years-old to do the Great Ocean Road 6km run this year, after her son Barry told her he was doing the marathon. Despite being a long-distance runner in her fifties, through to her seventies – Eleanor hadn’t run for 11 years!

Her enthusiasm inspired the whole family to get involved – with three generations running together. Commenting on receiving her medal, Eleanor said: “I am thrilled to receive this lovely medal! My family nominated me and you made it possible! I will treasure it.”

The iconic Great Ocean Road Running Festival bagged its own PB this year, as more than 8200 runners took to the scenic route. Recognised as one of the world’s most breathtaking & undulating running routes – the 44km (total) course starts outside the iconic Lorne Pub and winds its way along the jagged coastline on the Great Ocean Road, finishing in Apollo Bay – a seaside village which is the gateway to The Twelve Apostles.

The Australian running festival, which took part from Saturday 18th – Sunday 19th May attracted a broad range of runners – from young racers attempting their first 1.5km Kids Gallop, through to the hardcore athletes tackling the 60km Ultra Marathon. Plus everything in between: the Lorne Hotel Great Ocean Road 5km and 10k walks; the Sri Lankan Airlines 6km Run, 14km, Half Marathon and Marathon.

“We all had the happiest time doing the Great Ocean Road Fun Run,” says Eleanor. “My son, Barry, wife – Sharyn and their girls Bree, Alex and Meggan and I all laughed the weekend away!”

Having been a sickly child, Eleanor has an amazing outlook on life: “I’m very thankful to still be here – life is a blessing!” An amazing achievement Eleanor (and family) – what an inspiration! A true iTAB Star!

Find out more about the Great Ocean Road Running Festival

Do you know someone who could be the next iTAB Star? Find out more here and get nominating!